The first meeting coordinated by chef Valerio Mallia with some of the migrant boys selected for the “Cooking around the world” cooking course as part of the INVOLVE project ended.
We met on February 12th in the welcoming restaurant “La Trinità” based in Modica owned by the twenty-five year old chef Valerio Mallia who has been professionally managing it together with his family for four years, after having had several experiences outside the local and family environment.
The first meeting was an opportunity  to know each other and to plan the recipes to be made and processed during the course.

We asked the boys which typical dish of their country he particularly liked and could elaborate together.
Among the migrant boys were present:

After listening to the suggestions of the boys, Chef Valerio, also in overview of the final festival in the form of finger food, proposed to create the recipe that we wanted to call “100 shades of rice” in two versions, a savory and a sweet version.
The savory one based on rice, chicken, fish (blue and shellfish-prawns), vegetables and spices. While the sweet recipe based on Rice or Cous Cous with yogurt, banana loku, cinnamon, raisins, almonds and plums.
From the next meeting which will be March 12, the group will begin to make the savory version in the traditional way as the boys know it and then rework it and revisit it in a Mediterranean key thanks to Valerio’s support and culinary art. 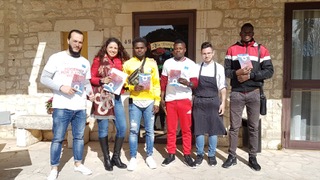