On August 7th  2019 the two INVOLVE teams from France (Solidarités Jeunesses France) and Italy (Legambiente Italy) travelled to Berlin. Paola and Fabio from Italy arrived in the afternoon and got to know our office. The participants from France, Matina, Anne Clotilde and Anais joined us in the evening, we met in the restaurant “Freischwimmer” in Kreuzberg for dinner.

The contact persons from the Kulturmarkthalle were also able to participate. This gave us the opportunity to get to know each other in the immediate vicinity of the water and in a relaxed atmosphere. The typical Berlin hospitality on the part of the waiters directly stimulated the transcultural dialogue. During the conversation, we were also able to quickly identify differences in dealing with sensitive topics; for example, it was absolutely no problem for the case of Italy to query the nationalities of the participants in the participation lists. A no-go in Germany, especially when working with refugees and people with a migration background. It sparked an interesting discussion as to how the participation of people from third countries could be proven. The usual procedure in Germany, namely with photos and as an explanation in the report, did not seem to be sufficient so this will have to be clarified later.

On Thursday we met at 10 o’clock in the Freizeitzentrum Upsala, in Pankow. The leisure centre Upsala is situated in a very beautiful garden, in a very quiet part of Pankow. We were warmly welcomed by Jens, the local social worker. 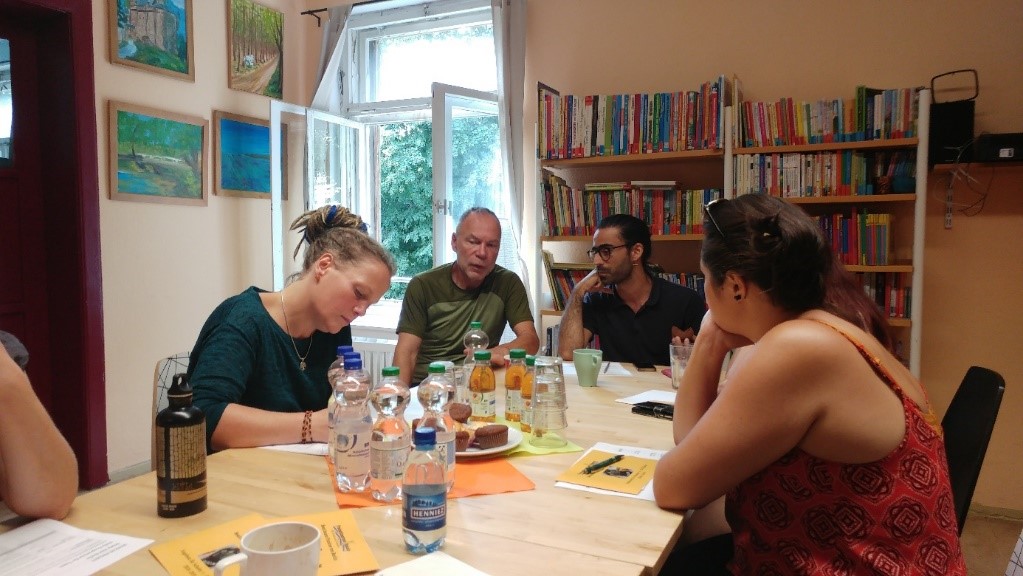 The director of the institution, Olaf Nieschalke, was also able to take time for us and tell us about the development of the FZU, which has existed for 20 years. We were lucky because the two volunteers Liane and Abir from ICJA e.V. were released by FZU and took part in our meeting. It was a very cordial conversation. Our visitors* could get a good impression about our future activities, e.g. the big summer festival on 2019-9-7 in cooperation with the Global New Generation Berlin e.V. this festival will have an Africa reference. 2000 people are expected. It became clear that we cannot document the number of visitors* to this INVOLVE activity with participation lists. 😉

After an extensive guided tour, our visitors had a good impression of the facility and its varied offerings. They were impressed and hungry.

Together with the volunteers and the social worker of the FZU we had a good meal at Nabir, a small Syrian restaurant in the neighbourhood of the FZU. 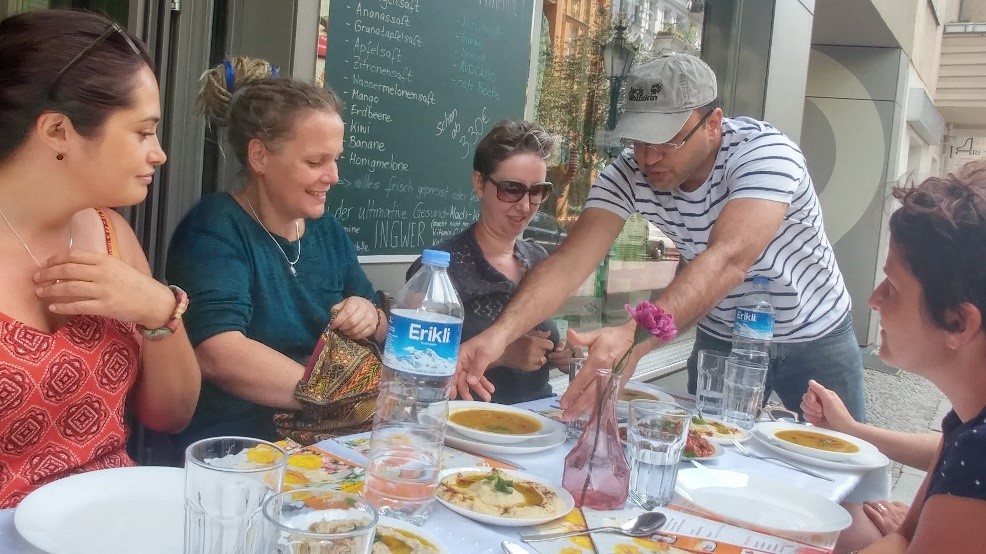 Best Practice of Inclusion were topics of the afternoon. Sepehr had selected two projects in Neukölln and led the group there. The first stop was the bicycle workshop “Rückenwind”. 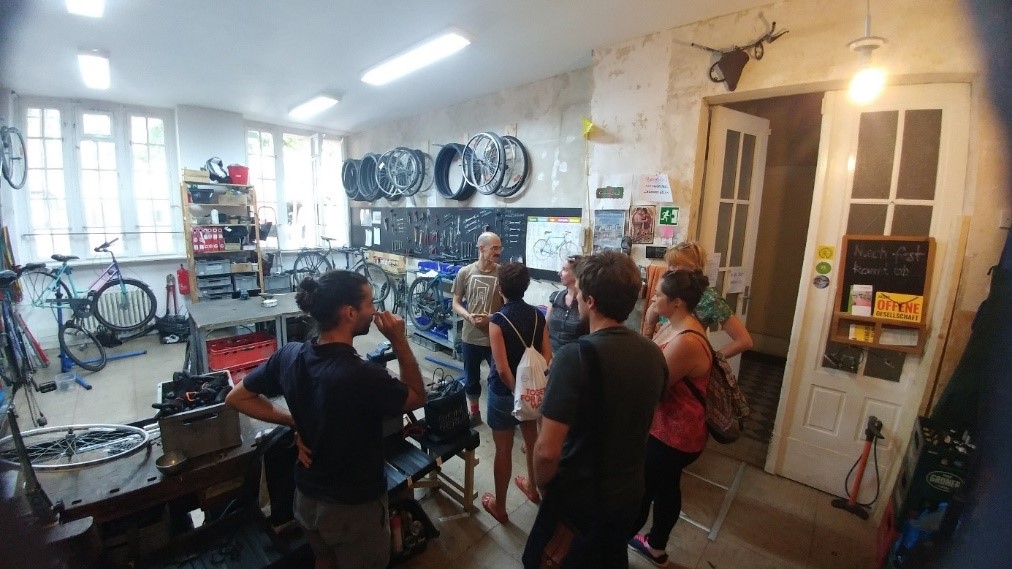 Rückenwind was founded in 2015 in the district of Neukölln in order to mobilize fugitives by bicycle in the city. In addition to giving bicycles to refugees, the main aim of this repair workshop is to give refugees the opportunity to lead an everyday life along the often cruel asylum procedure and to be active in society. At the same time, this project brings people together and breaks down prejudices.

After a lot of interesting information, the group had a relaxing coffee break in Cafe Refugio. 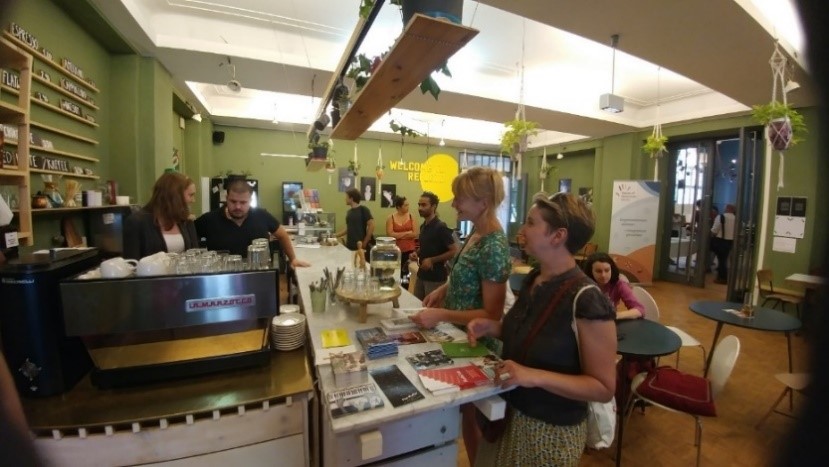 Since summer 2015, people who are looking for a new home and a new life have been living and working in the Refugio Berlin. Refugio is a project of the Berlin City Mission. New and old Berliners live and work together in Refugio Berlin on six floors. Refugio Berlin was born from the idea of the share houses that the founders Sven Lager and Elke Naters brought back from South Africa.

Our friendly appearance and very probably also the convincing smile inspired an employee to unlock the roof terrace, which is normally not accessible for groups. The group caught an overwhelming view of the sky over Berlin. 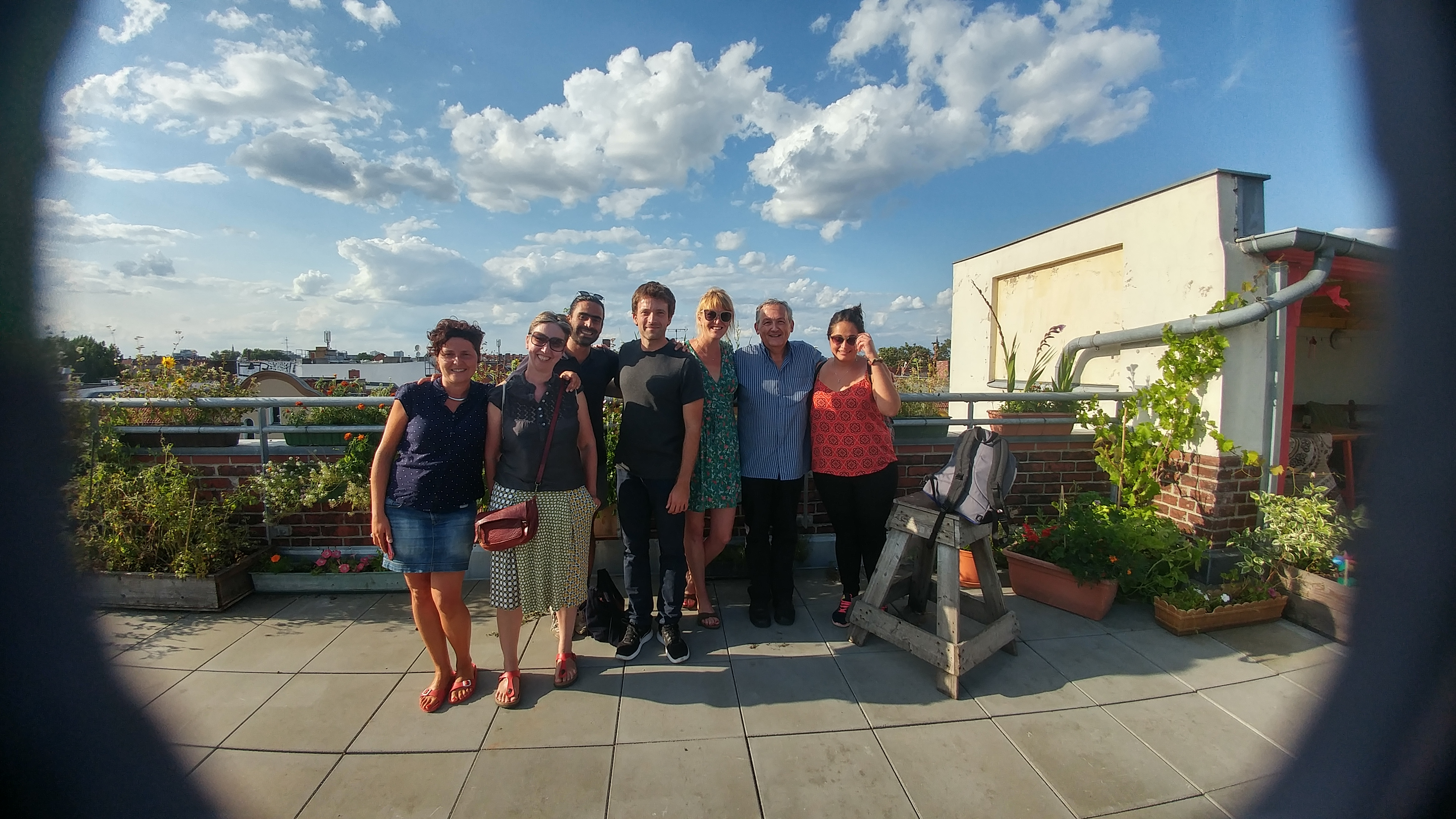 Also on Friday there was an extensive program which started at 10am in the morning in the Kulturmarkthalle in Pankow. 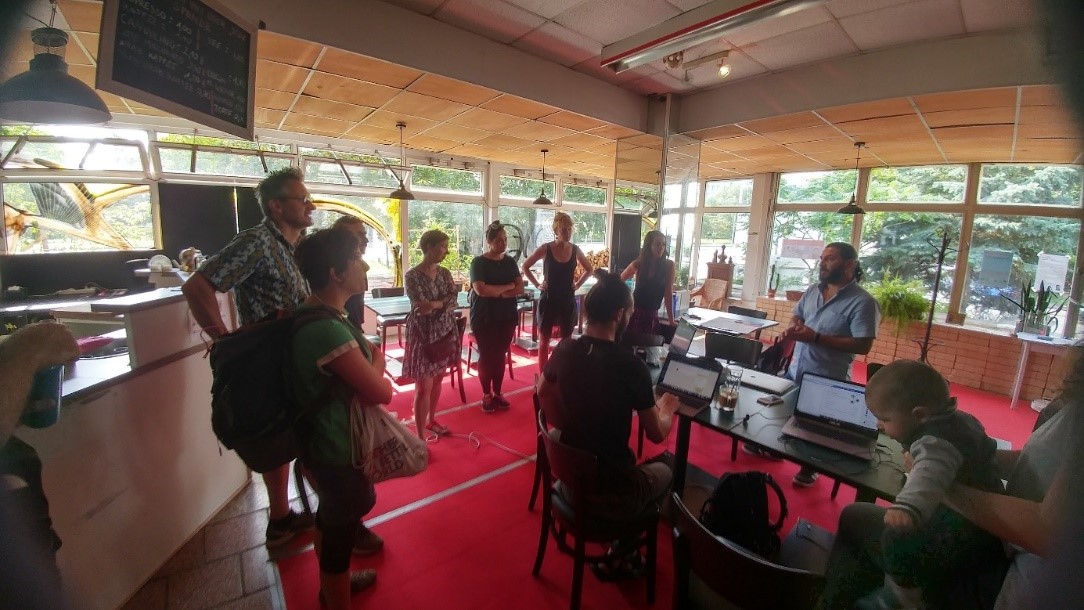 Also in the Kulturmarkthalle volunteers of ICJA’s SAWA Programme are working, but they were at a seminar on environment protection organized by SAWA which we could visit later. We were happy to meet them there. In a very informative guided tour, the group got to know the very impressive work of the KMH and became familiar with its history. 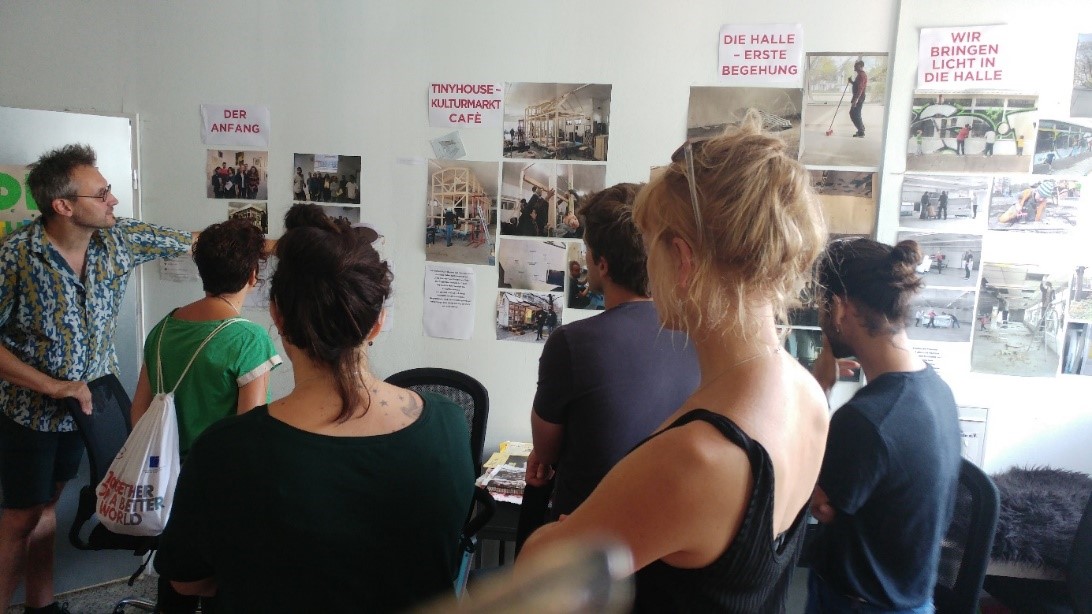 The KMH was originally a supermarket owned by the Jewish community. The building was terribly dilapidated when Ludger Lemper (leader of the KMH) discovered it in 2015. Since then, he has mobilized the entire neighborhood and done excellent public relations work, making this place an exemplary neighborhood center. The neighboring shelters of refugees are involved in many activities. There is also a large workshop in the premises. There we visited the Tiny House, which was built in a project together with the neighborhood and the volunteers. It is the KMH’s emergency car and can be used as a cafe, as an information car, as a stage and much more. 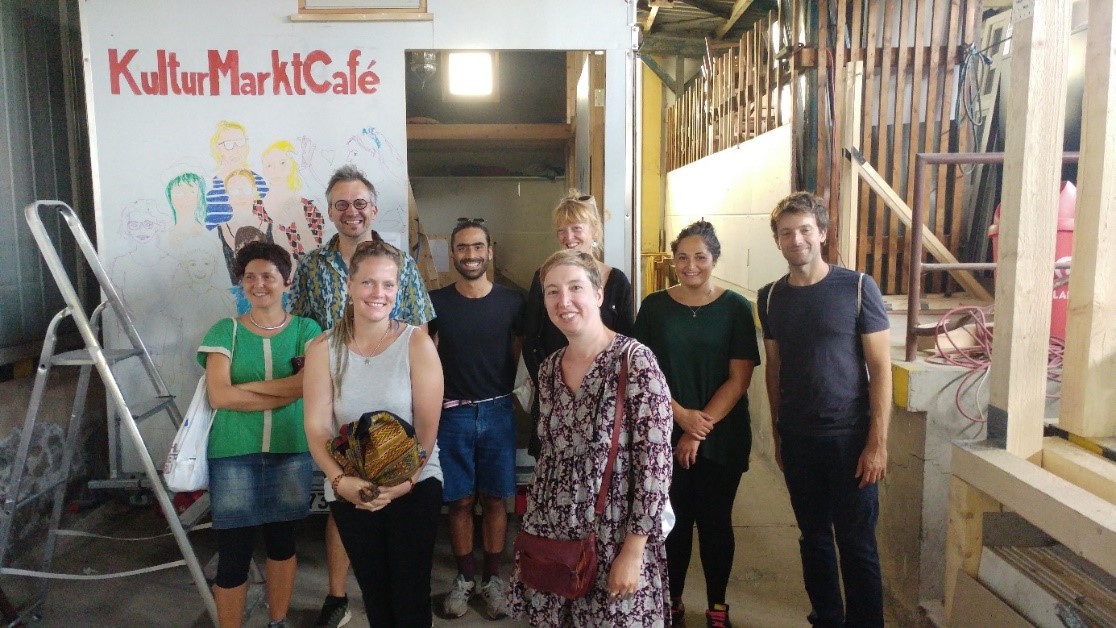 At a cafe and homemade cake we discussed the effects of right-wing populism on work in our countries. The situation worldwide is overwhelming. 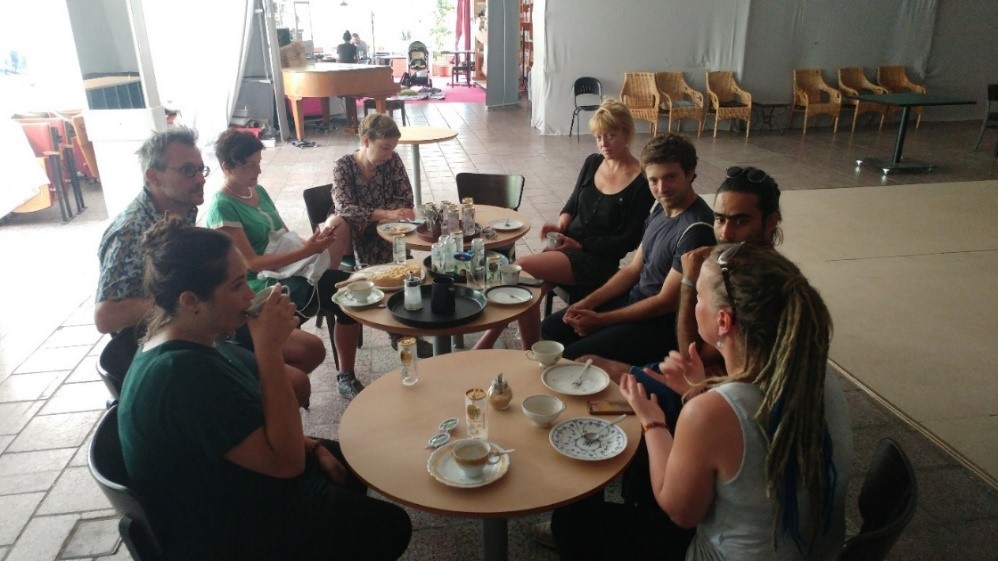 After the difficult topics a walk through the neighbourhood was very refreshing. We visited the “Peace of Land”, a potential cooperation partner for the INVOLVE project. A self-organized permaculture garden not far from Landsberger Allee. 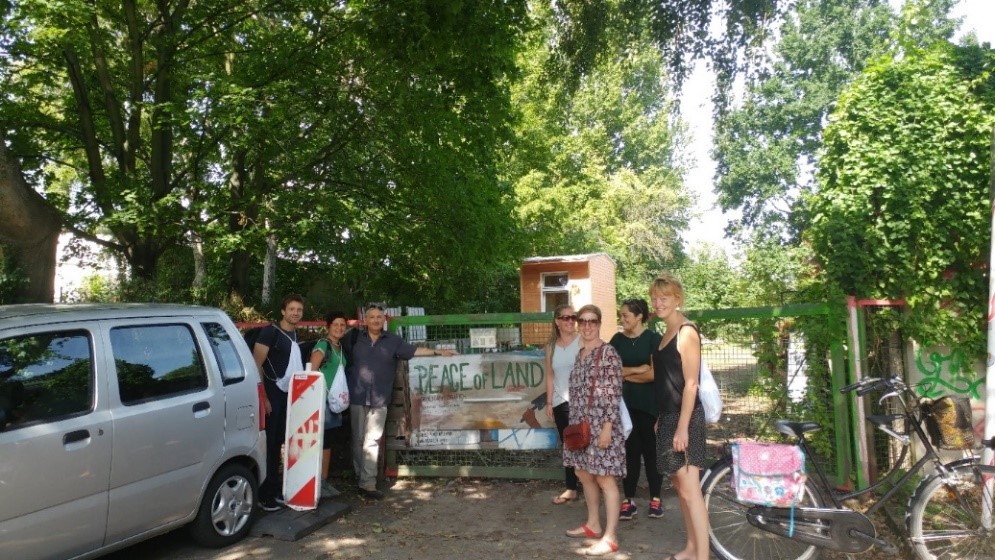 When you step through the gate of the Peace of Land, it is as if you leave the city with its dirt and noise and penetrate into a completely different world. Suddenly the noise stops, it becomes quiet, only the humming of insects and the chirping of birds can be heard. 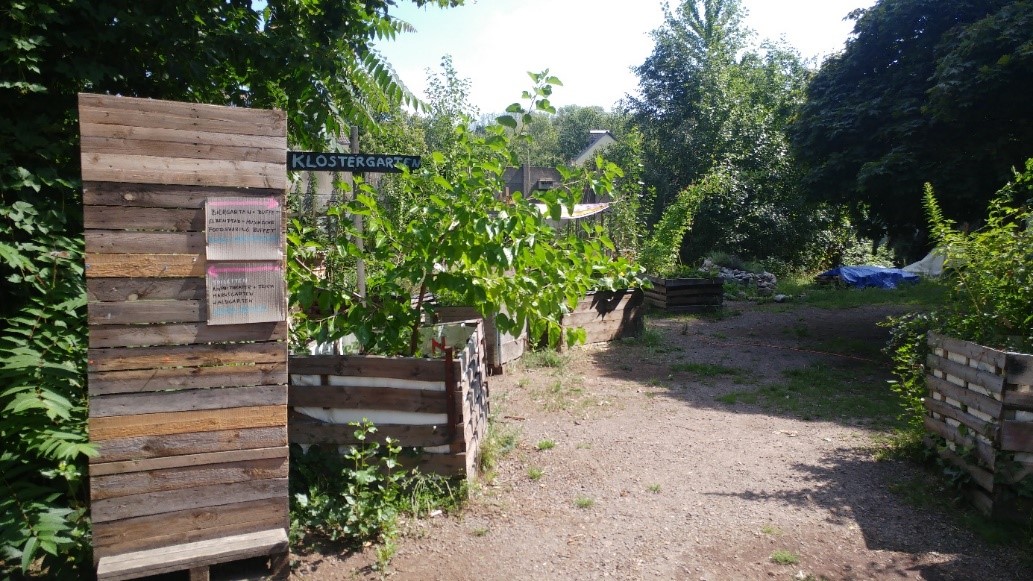 Biodiversity in the middle of the city! Wonderful and exemplary. It was sad to learn how such important sites have to fight for their survival, always threatened by closure and low or no budget projects. Without the commitment of the volunteers and volunteers there would not be the following place of visit. By bus we went on to Kreuzberg, to the princess gardens. There a vegan meal waited for us. Some of the food came from the gardens themselves. Healthy nourished, we threw ourselves under the trees into our last common work talk. 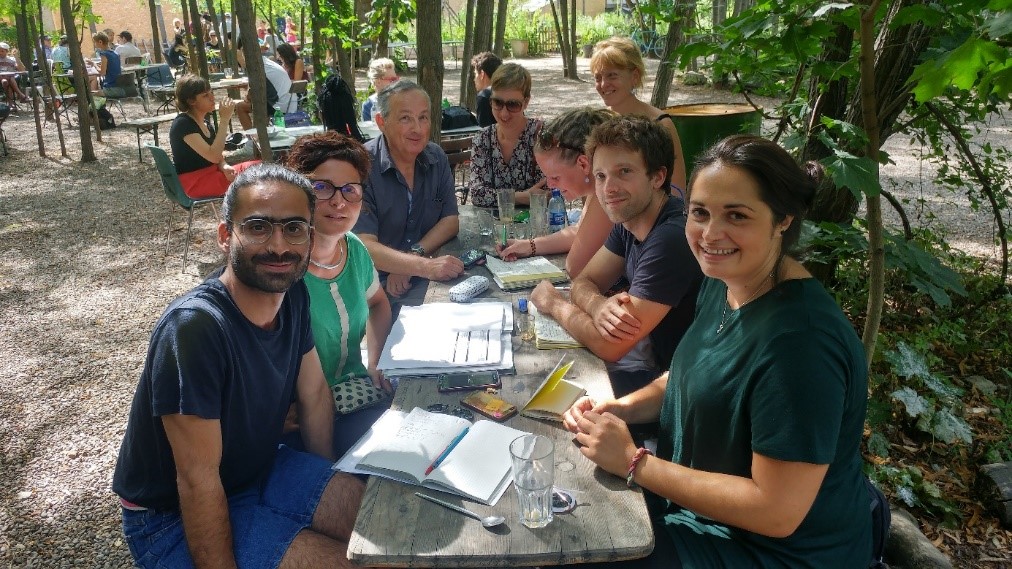 We coordinated the next activities, gave each other mutual feedback and said goodbye to each other with appreciative words. In my opinion, this was a successful study visit at all levels and thanks to the comments we have heard we are confident that the participants left with lots of new impressions and had a professionally and personally enriching experience.